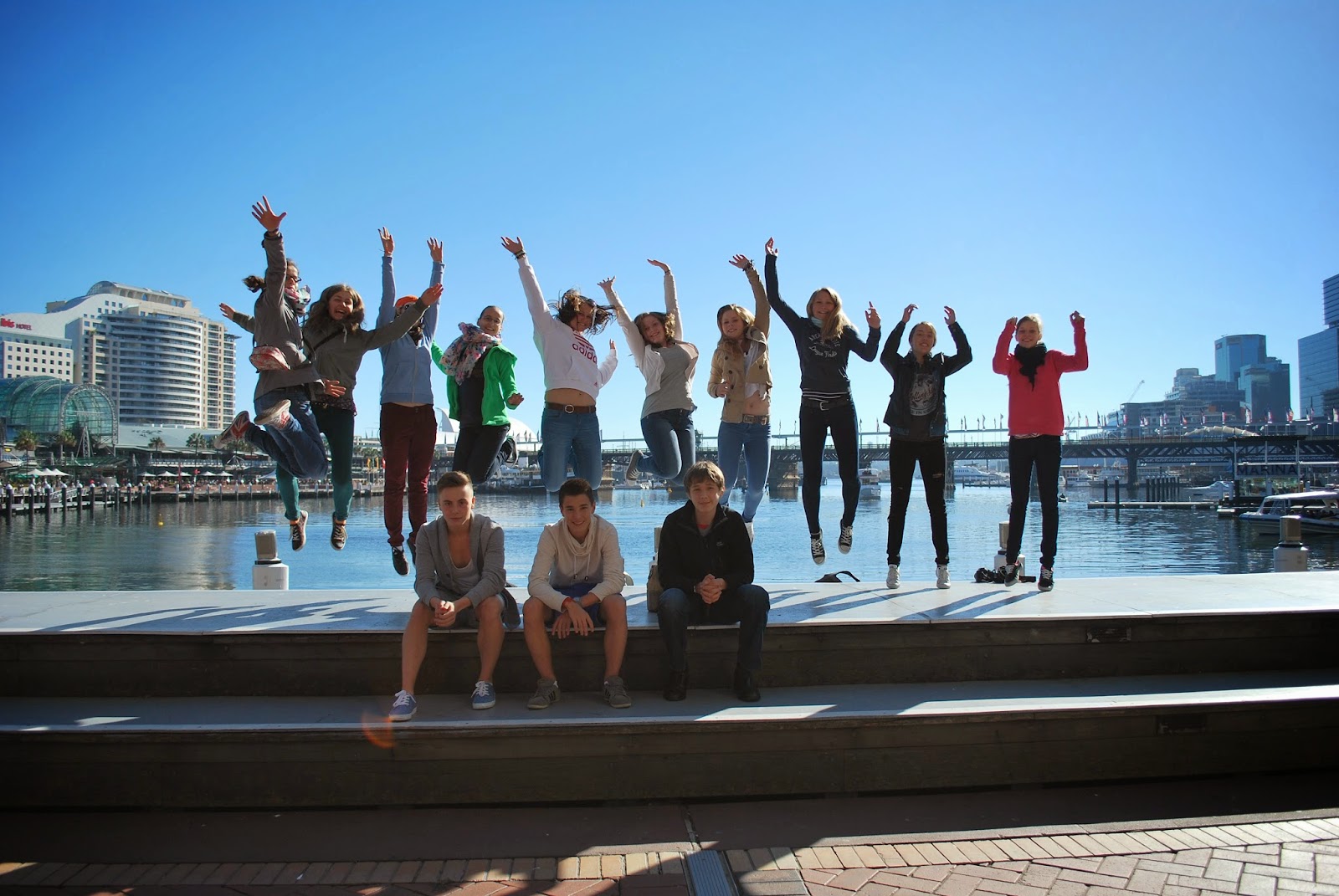 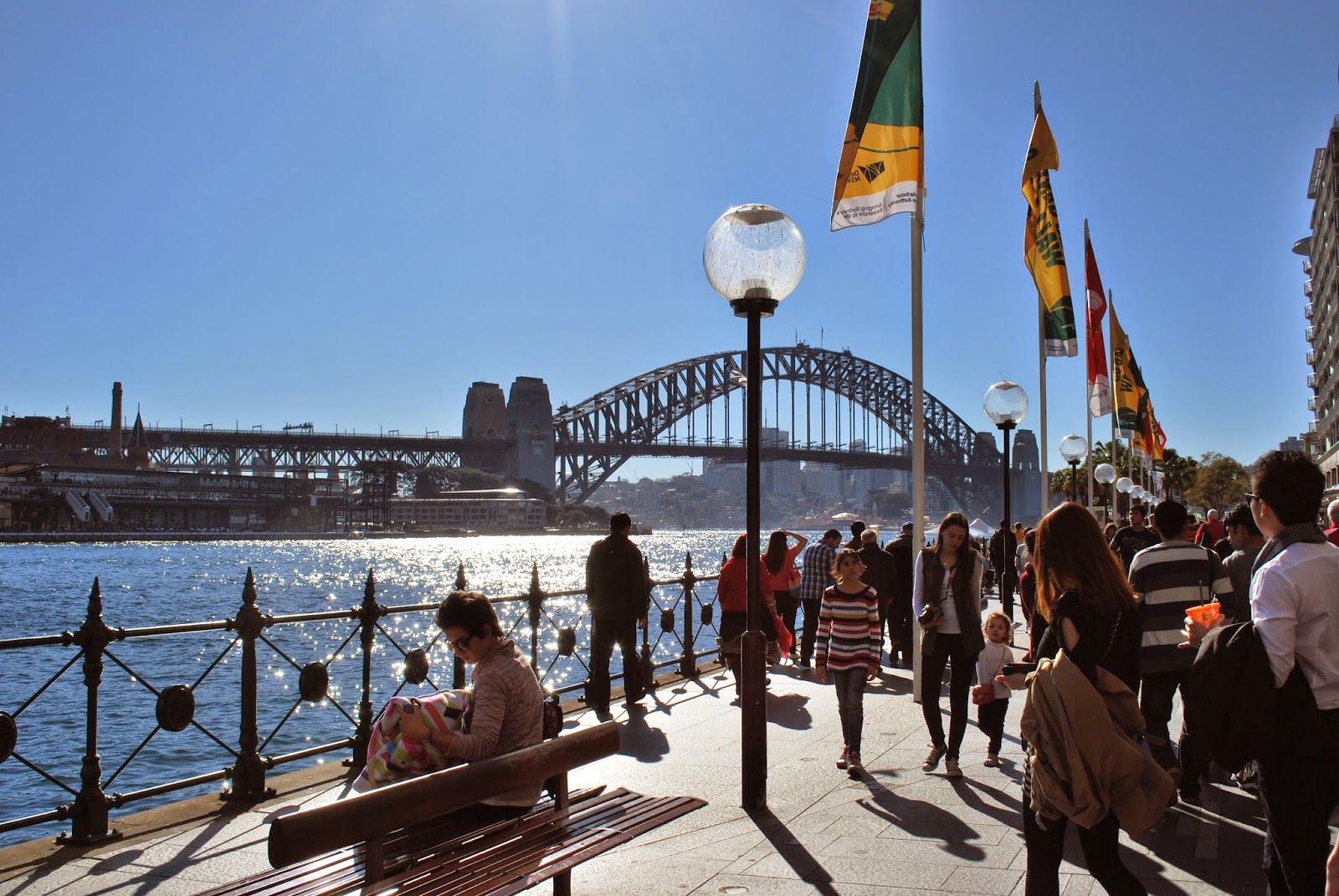 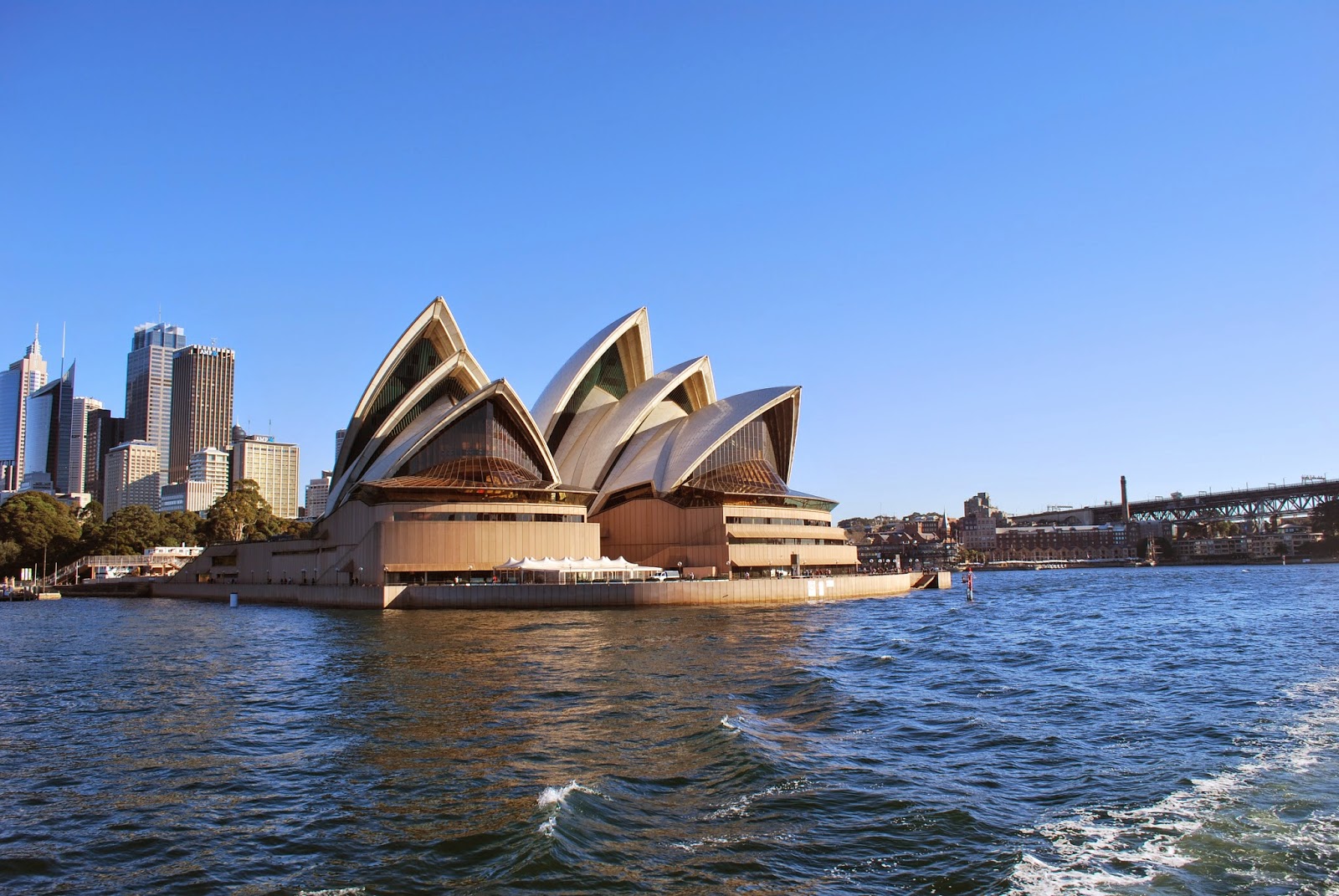 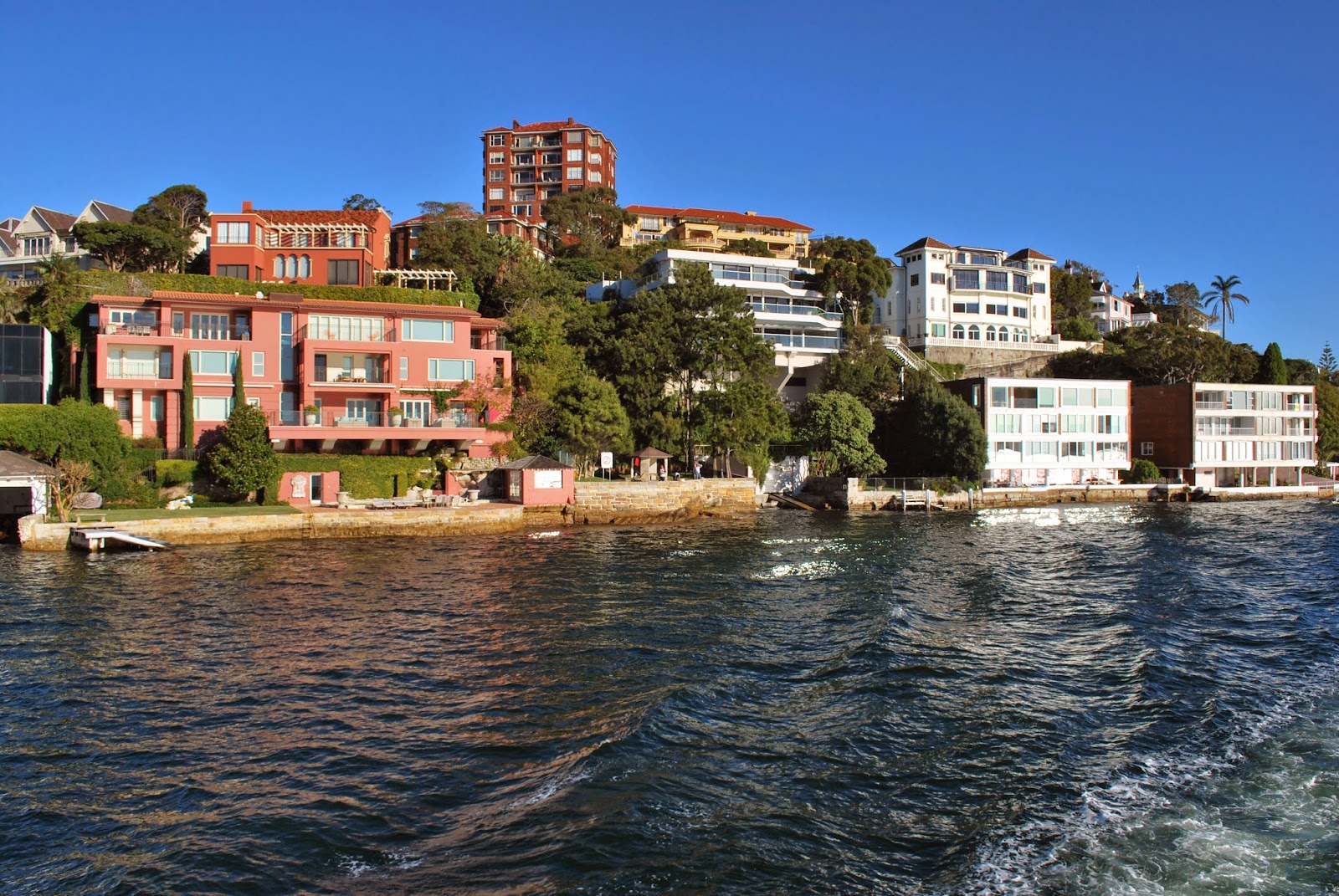 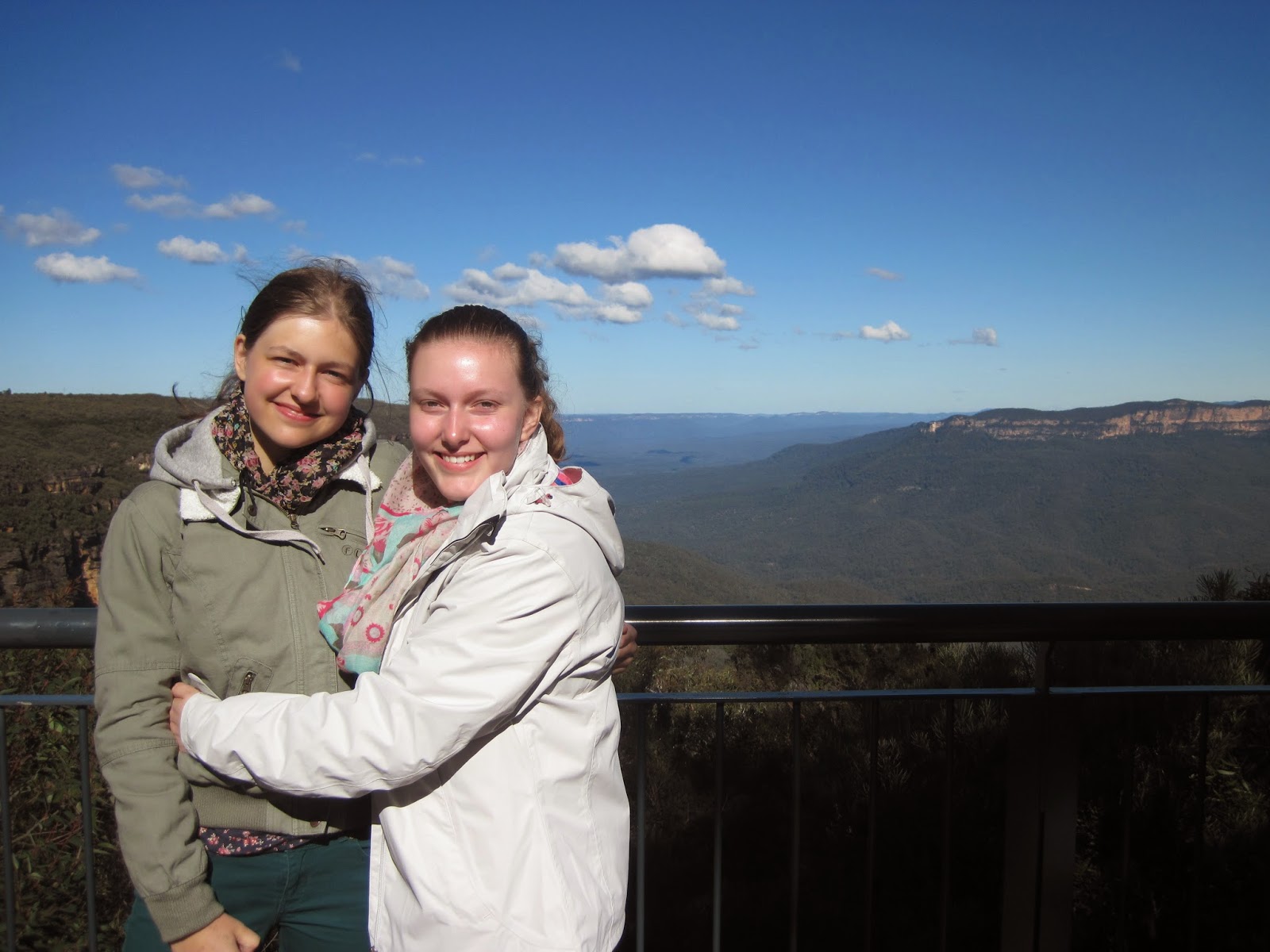 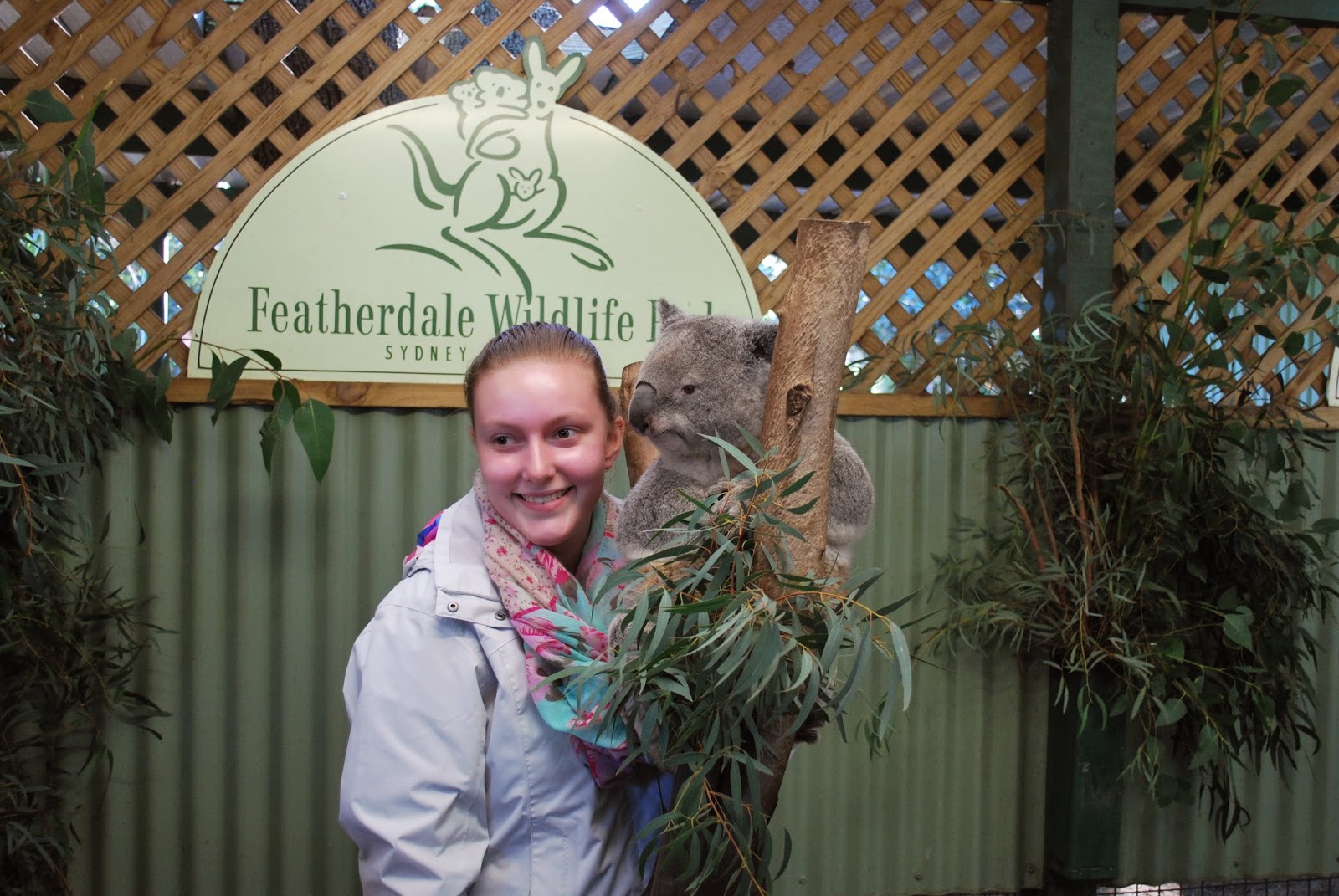 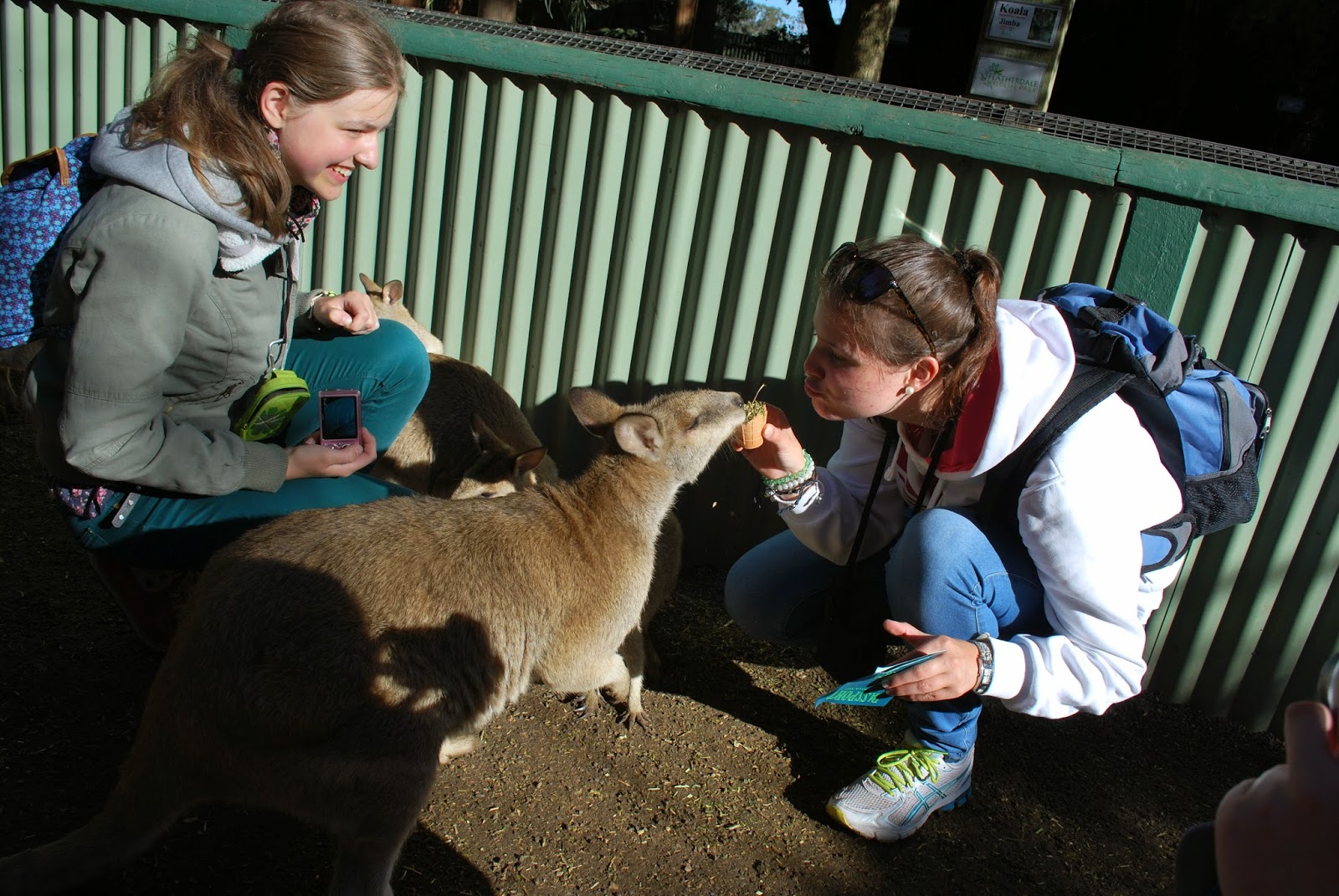 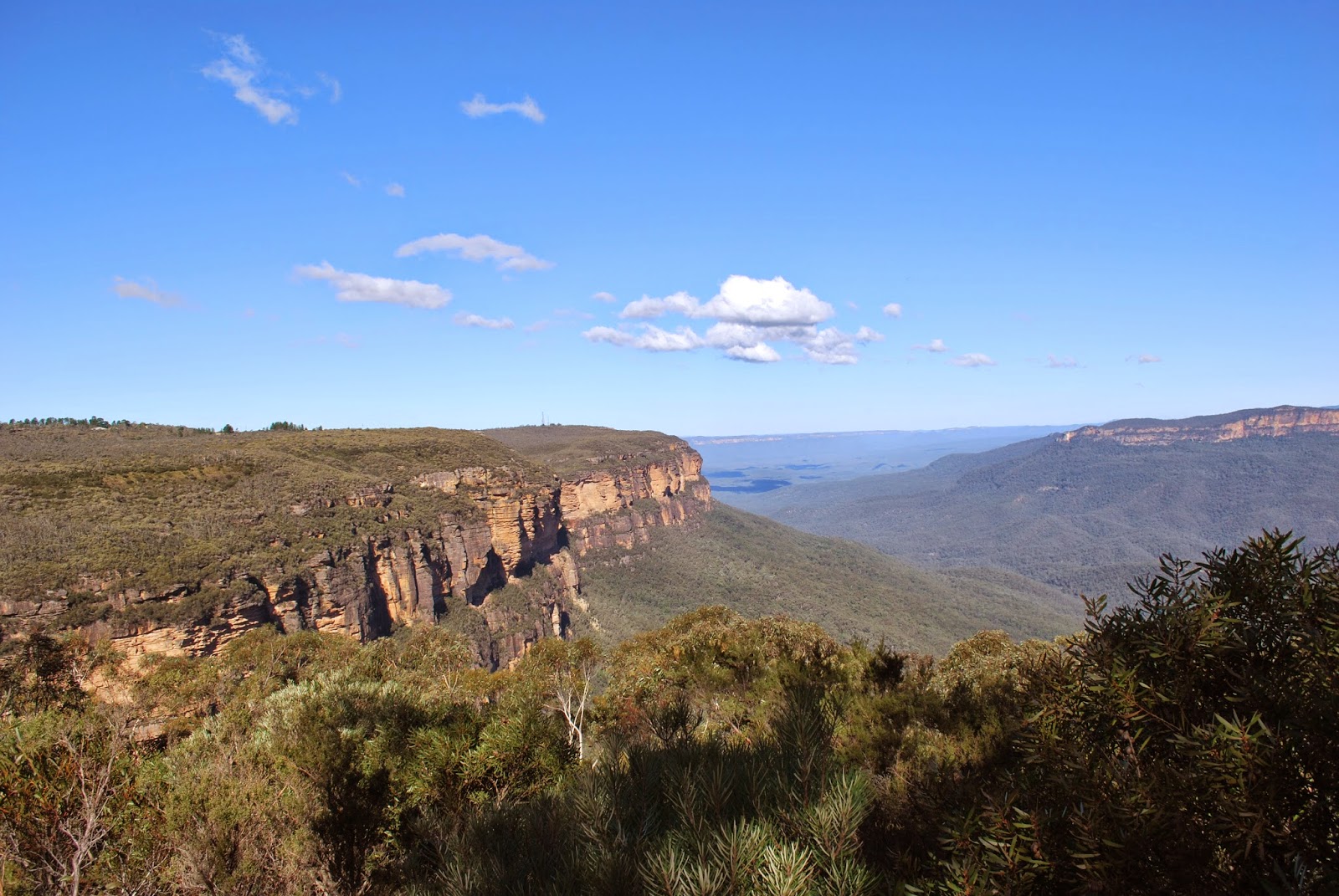 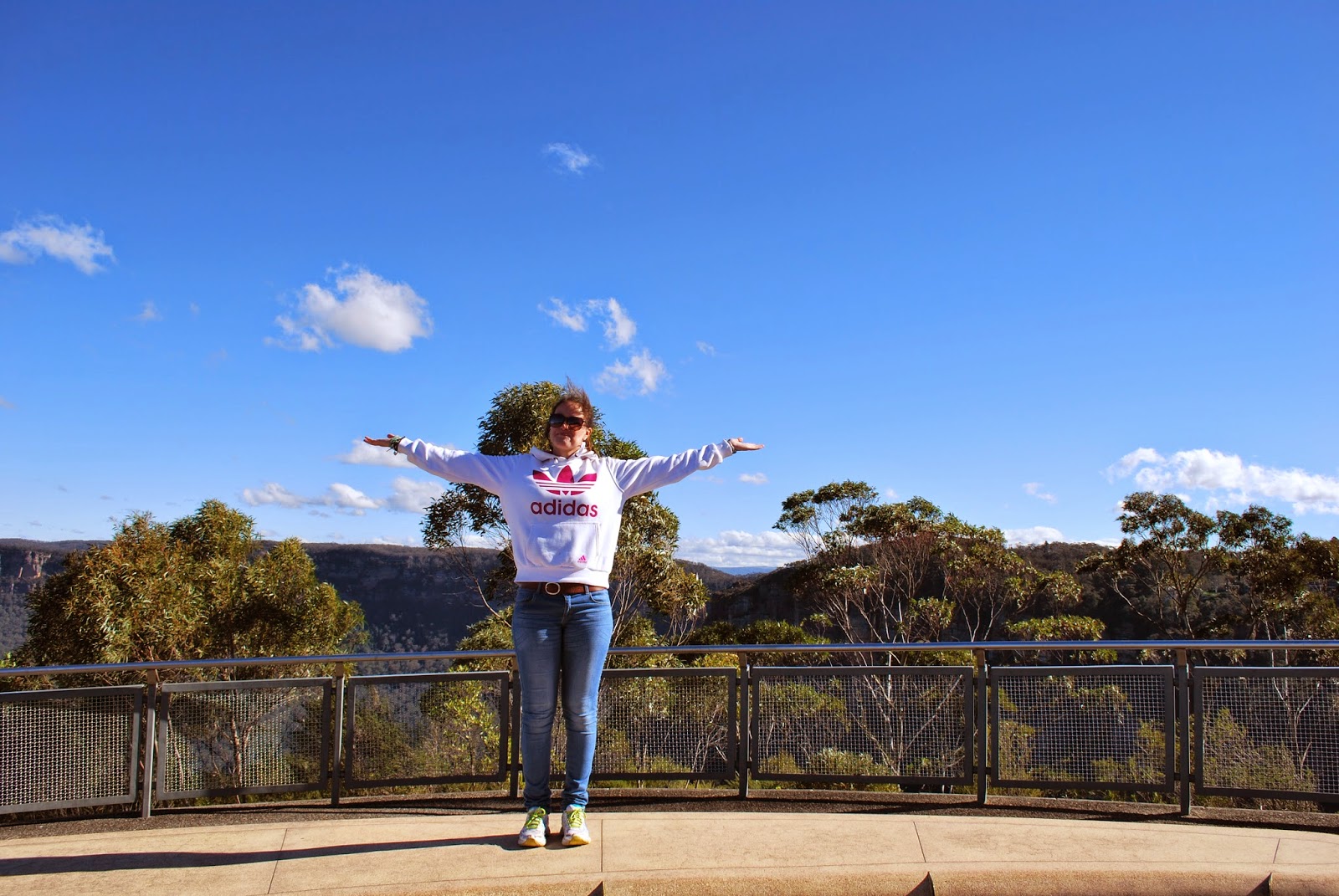 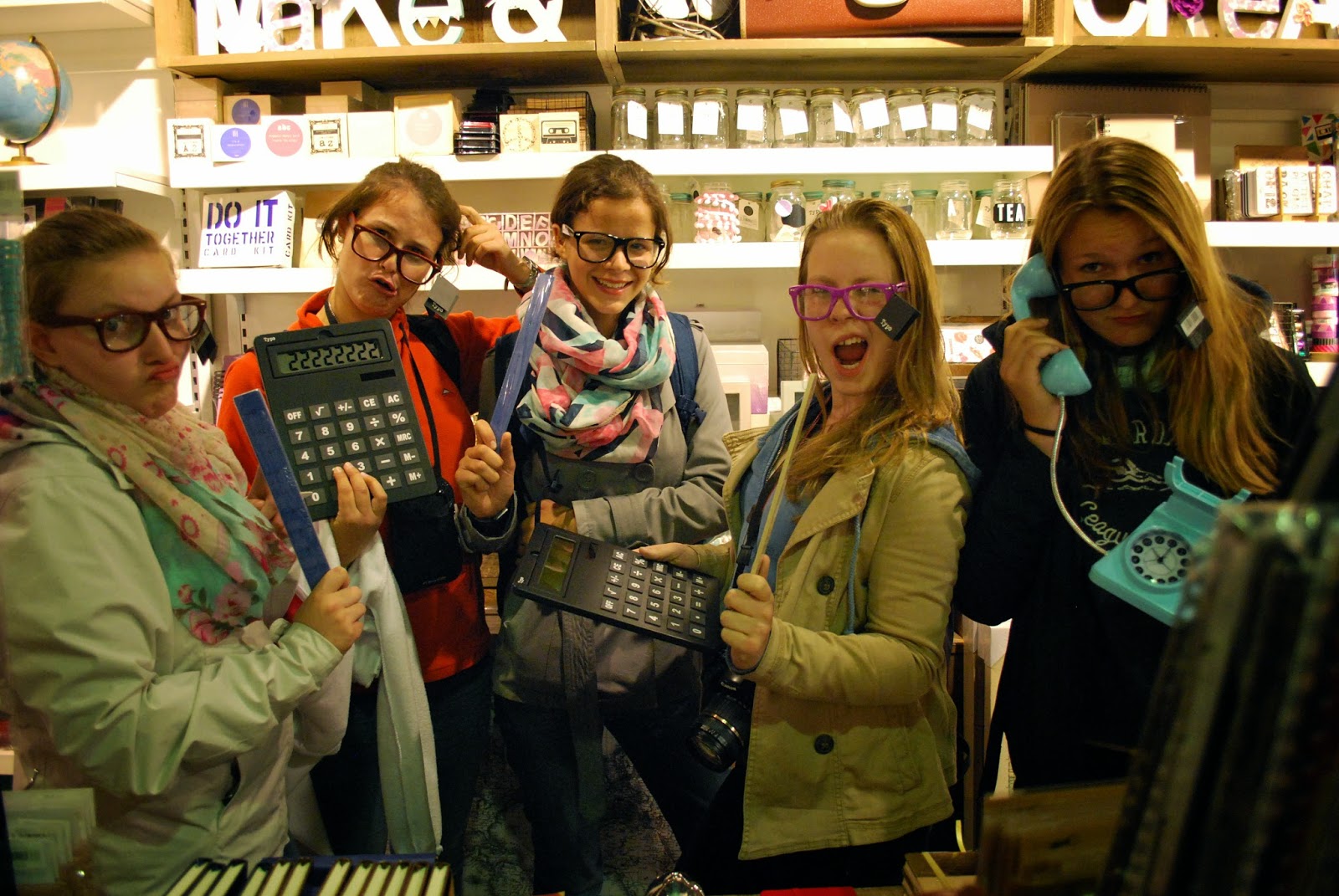 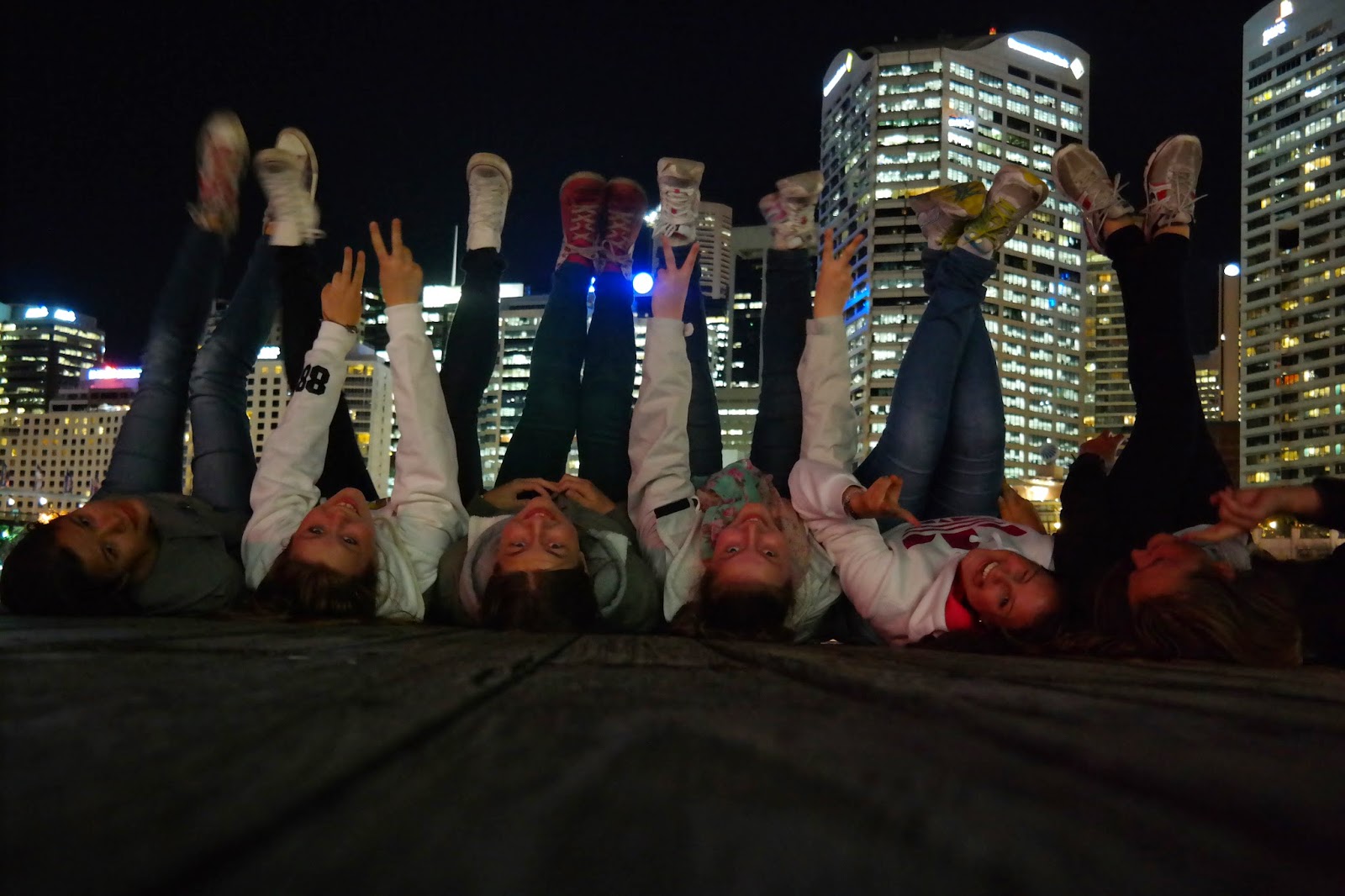 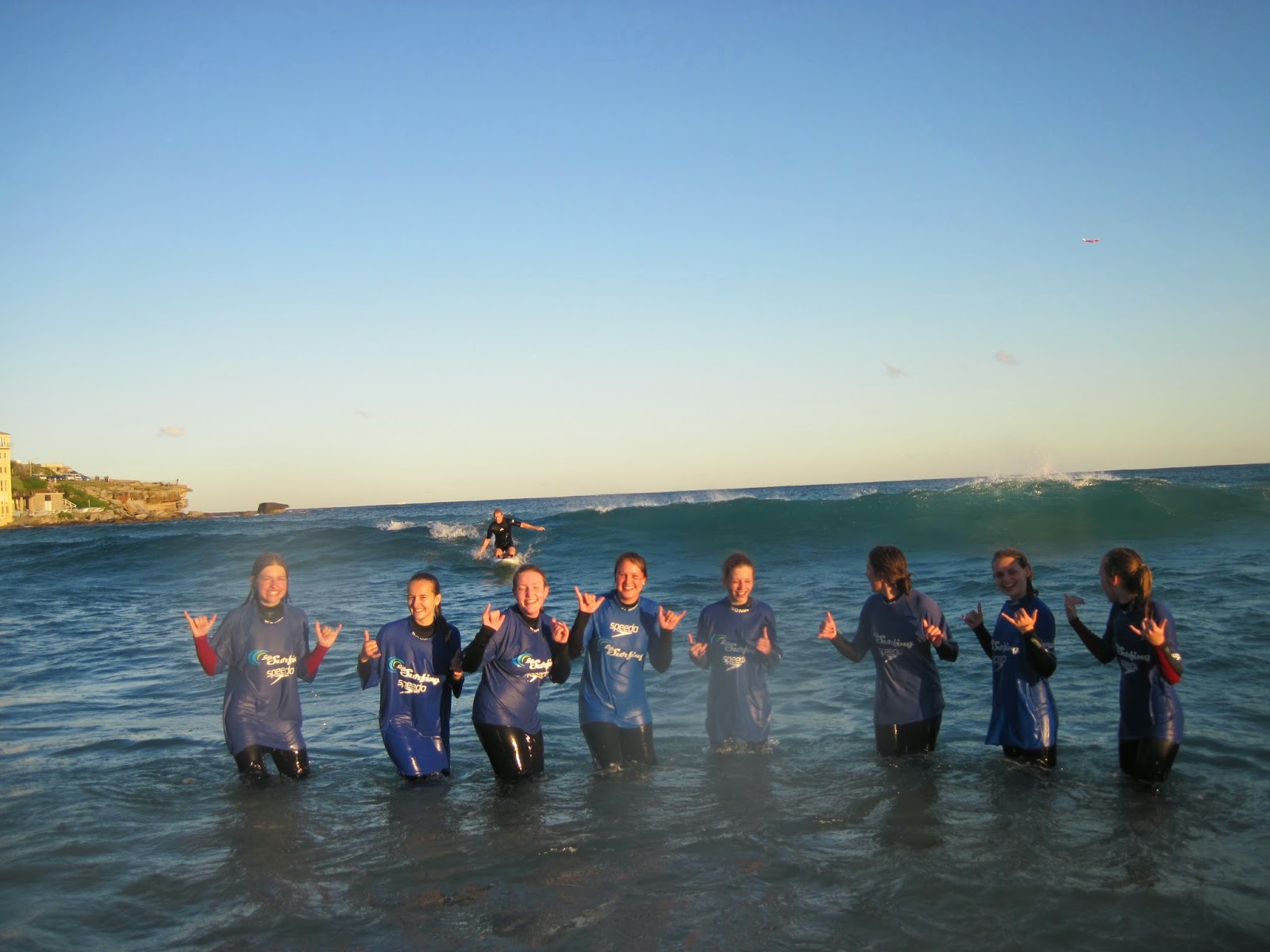 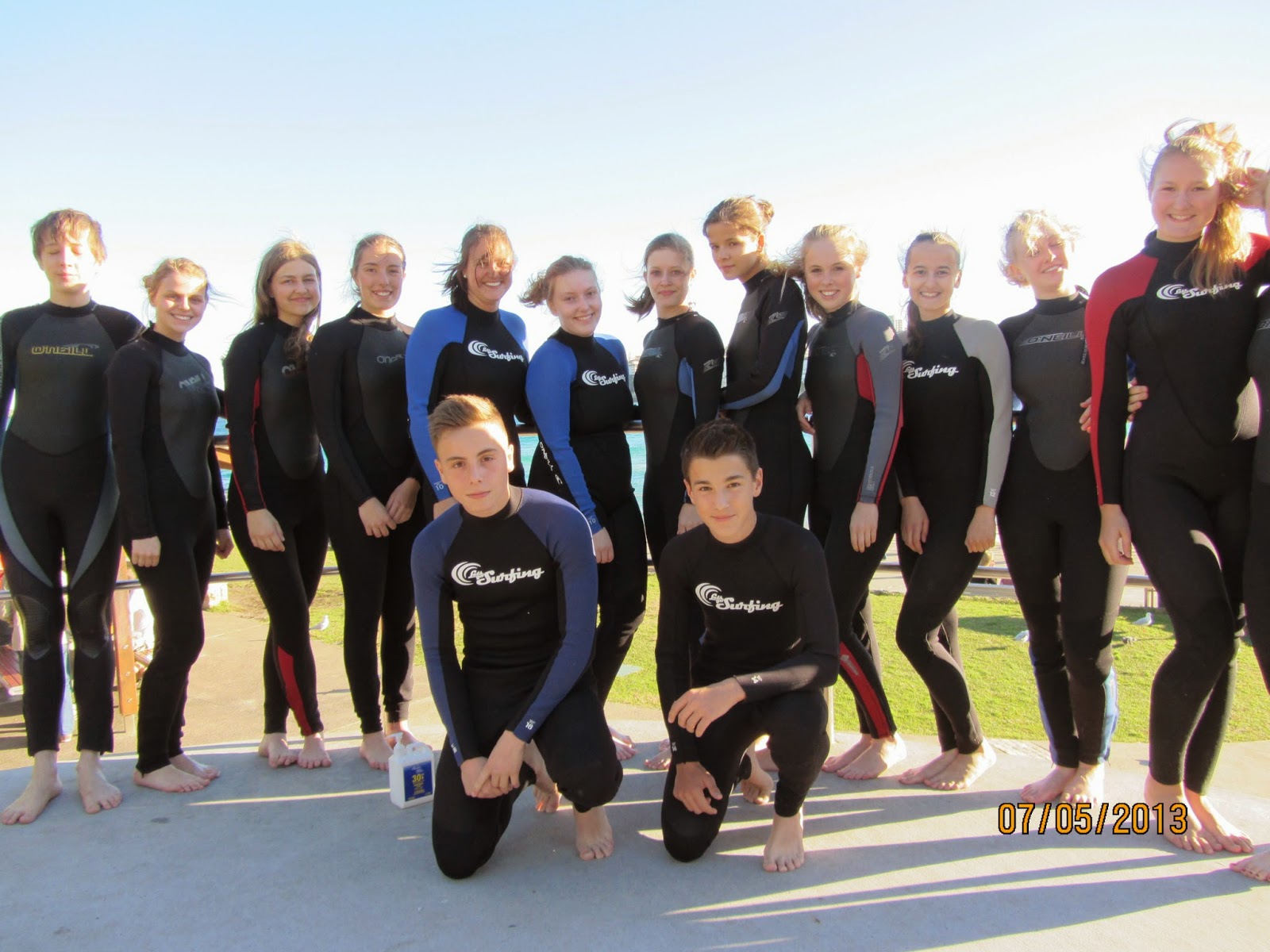 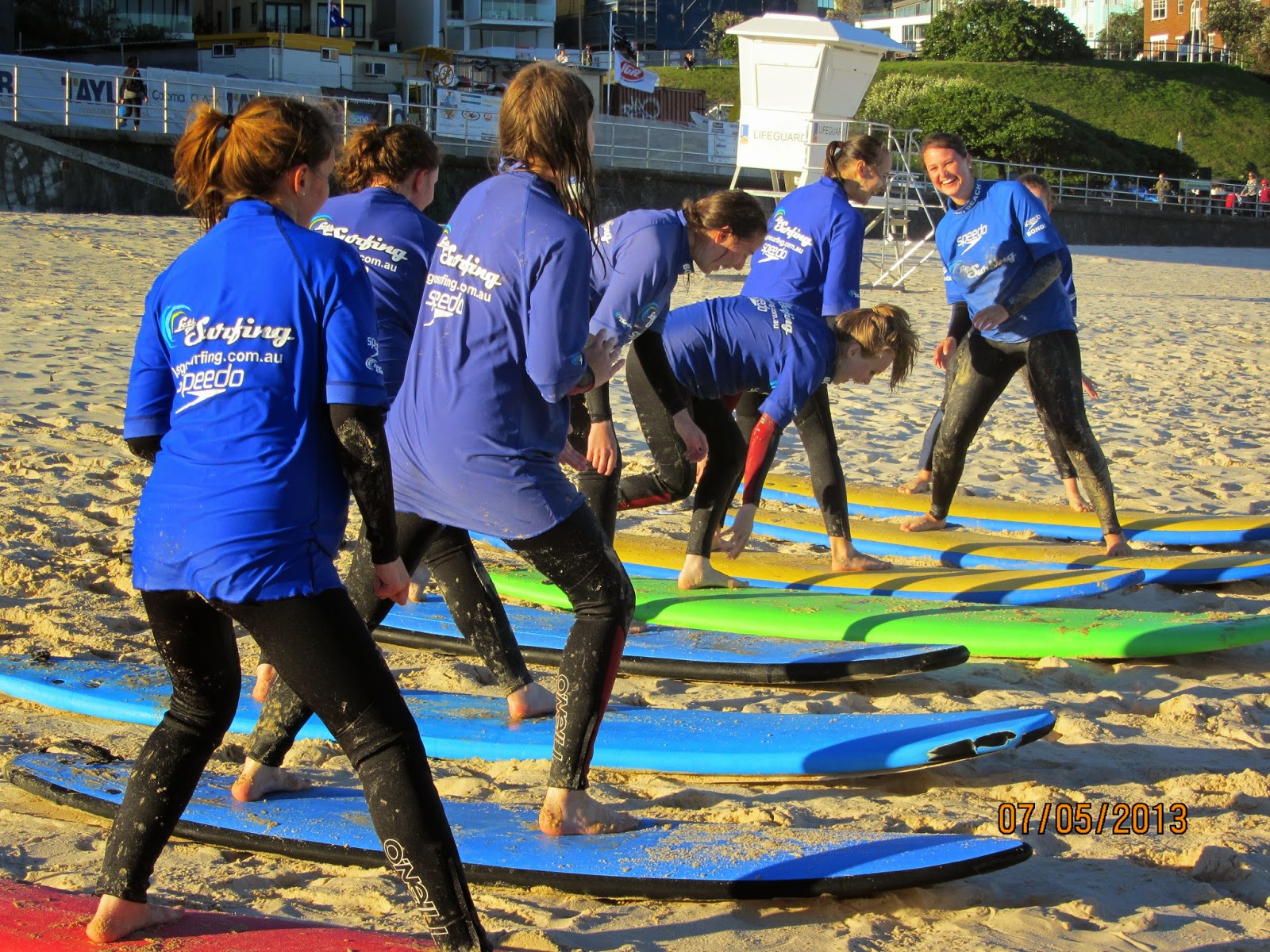 Today I am going to talk about the orientation days in Sydney.

On the 03.07.2013 we (AIFS group) went from Sydney airport to our hostel (Wake Up Hostel Sydney) by bus. We couldn't check in because we arrived there too early so we brought our luggage into another room, had breakfast and splitted our group into 2 groups. After that each group went to China Town and Darling Harbour to different times (otherwise we would have been too many (ca.30) people). Darling Harbour is a very pretty habour and you can also find the popular 'Hard Rock Café' there. Of course, some of us were going to buy a t-shirt there but most of us didn't because it was just too expensive (AUD$35).After that we went to Subway in Playfair Street and had some lunch and I tried some pink fanta (it's not yummy, pls. don't even try it!).After having lunch we went to the Sydney Opera House and the Harbour Bridge. I was so amazed! There were so many artists around us (didgeridoo, art, acrobatics, etc.). It really took my breath away to see all this people around the Opera! - I'll never forget this moment!


Are you able to go to Sydney?- You should do it, it's just amazing!


After seeing the Opera House we went on a boat and started a cruise along 'Fort Denison' and 'Shark Island'. After the cruise around Sydney we went to Mamma's (an italian restaurant where we also met a German girl) and had pizza, noodles and salad for dinner.At night we fall asleep very early.

On Wednesday we had to get up very early. We had some breakfast and went to our tour bus which brought us to the Blue Mountains! First, we made a stop at Featherdale Wildlife Park. In the park we were able to pet some kangoroos and koala bears. It was amazing and one of my biggest dreams came true! After the park we went to the Blue Mountains by bus. The landscape was just beautiful! When we arrived we started a tour into the Blue Mountains with our bus driver (he was also our tour guide). We've seen some waterfalls and our guide told us lots of Aboriginal stories. After walking into the 'bush' we visited some other small towns. In one of this towns we stopped for having a BBQ. This was my first time having an Australian BBQ with kangoroo meat and Lemon Squash (both is pretty yummy!). They also had ALDI (a German supermarket) in this town and most of us went shopping there. After 'lunch' we went to the Three Sisters (stone formation in the Blue Mountains) and had some time to walk around there. Our tour guide was the best! He was so funny and told us a lotof stuff about the BM and Australia.He drove us back to Darling Harbour where we had dinner in a Mall. We were also allowed to go shopping this evening (I bought lots of post cards!!!) and Moira, Lotti, Jenni, Julia, Ursula and me, we took lots of photos together in Darling Harbour at night ...


This night was just awesome like everything else we did together guys! Thank you!

On our third day we all could sleep a bit longer and had breakfast in our hostel again. This day we went to the AIFS office in Sydney and had a workshop for about two hours. They gave us a lot of information about the Australian culture, High School and animals. After sitting for 2 hours we went to Bondi Beach and started surfing- soooo much fun!! At the end we took some photos with our 'surfing teachers' (real surfer boys)! At night we had dinner in an Asian restaurant (lots of us got sick of this). After we came back to our hostel, we started packing our suitcases. One of my friends couldn't find her passport anymore so all of us were searching for it! Luckily we found it :-*

The last day was pretty short. We had breakfast, checked out and brought our luggage to the bus. We got a lift to the airport and our group splitted up. Each of us flew into her/his own adventure. I flew in the same direction like Moira and after a couple of turbulances we arrived in Cairns! My homestay coordinator (Suzanne) was already waiting for me and we drove up to Atherton. I arrived at my hostfamilies house in beautiful Atherton!- let the adventure start!